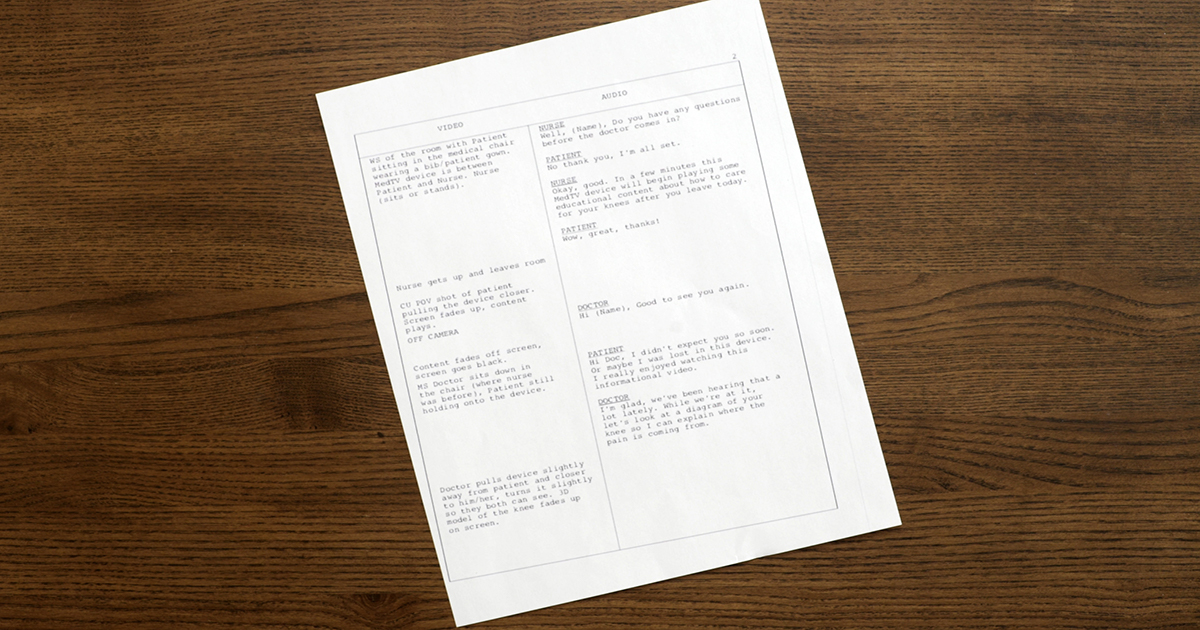 Thinking Differently When Writing for Video

Scriptwriting is a large portion of the job for the pre production team here at Spotted Yeti Media. It may be surprising that we write so many scripts when we aren’t producing blockbuster films, but in reality for any production to go smoothly writing a script for what you plan to shoot is a necessary part of the process.

It is a style of writing that may come naturally to some and can be more of a learning curve for others, because it’s not the same kind of writing your English teacher taught you. We mostly write short format marketing scripts for videos intended for commercial, web, or live event use. In these cases, brevity without losing action or emotion is the knack to scriptwriting. You are not writing a Jane Austen novel after all, you are writing with goal of creating a video, and that’s what will convey your message. In the beginning of a project we often hold creative brainstorming sessions and these are a great way to discuss concepts and how we can create them for video. After that step, it’s time to type out all the details by writing your script in what is called “active voice” and then keeping it simple!

In writing essays and blogs a lot of writers tend to use what is called passive voice, but in video we should pretty much always be using active voice. These were terms that were totally new to me when I entered my “Writing For Media” course in college, and sometimes it is still easy to get tripped up on knowing the difference.

When using passive voice, you write like you’re English teacher taught you:

“The children were surprised by the puppy,” is a perfectly acceptable sentence when writing most anything except a script. When writing for video we would say, “The puppy surprised the children.”

The meaning of the sentences are the same but the way it was said is what counts. In passive voice the first sentence sounds fancier but is also more subtle. In active voice the sentence is stronger and written in a clear tone, and conveys more excitement.

What is the purpose of active voice?

When scriptwriting we want to match the visuals as much as possible. You don’t want to get caught up in flowery language of a script, to the point where it is difficult to find footage to match an ambiguous or intangible concepts. At the end of the day, everything that appears in your script will have to show up on video somehow. Active voice provides a much better read. It’s more engaging, faster, flows better and makes you feel part of the action. When writing a script you want to pull the reader into the story instead of distancing them from it.

Just like in our latest “Spotted Strategy” video, one of the best tips we can give video professionals and screenwriters of all skill levels is to keep it simple. For the most part, you want the video visuals to move the story along. Most of the time you’re producing a video to break down complex concepts into digestible media, so don’t get in the weeds with complex scripts. Plus, in today’s world with attention spans getting shorter and shorter, active voice is more important than ever.

Our team at Spotted Yeti are pros at active voice scriptwriting. When you hire us time doesn’t have to be wasted worrying over the puppy and children and if the sentence structure is correct. Writing scripts is just another piece to making smart video work for our clients.

Jenna Adkins divides her time between editing and assisting the producers when needed. She uses her experience in documentary-style editing to create compassionate stories that captivate audiences.  Jenna graduated from the University of Cincinnati’s College Conservatory of Music where she studied Electronic Media and developed her skills in video production. With a focus in producing and editing, she interned at various media companies including Cincinnati’s PBS station CET and co-produced content for The Art Show. Her experience elevates content to move viewers. In her free time Jenna enjoys visiting local breweries, reading biographies, and bingeing TV shows on Netflix.
connect me :

4 Things to Consider When Casting Your Video

The time has come to select interview subjects for your video. We’ve decided on messaging, themes, location, and timing....

Sure, it isn’t Hollywood, but being on-camera in your company’s marketing video can certainly induce nerves that sky-roc...

Your Videos Need Captions: Here’s How and Why

Social media is a popular part of daily routines. As a mother of two, I relish the 20-minute brain break into social sit...